Positional components on offense in a 3-2-3

The Center back must be competent and confident on the ball. On a goal kick or ball in the goalkeepers hand the center back will position themselves at the top of the penalty area near the arc.  They must then be an option in the offensive sequence, providing a run off the ball when the outside back receives, while also providing cover for the team in case of possession loss.

In some cases a pass back to the supporting keeper might be the solution but only if the keeper is supporting at a deeper and is looking to switch the play.  Once the first line of pressure is broken the center back must then step to support the midfield or slide to support the fullback at a deep angle, hips open to the field so the ball can move onto the other side of the field or back to the goalkeeper to restart the play. Center backs are in a very advantageous position as they can see the entire field, they have to be able to read situations developing in front of them and know when and how to support their teammate.  A center back receiving a pass during a team’s offensive sequence means that the team is looking to maintain possession and a switch of play is commonly needed.

A good center back will always be able to identify where the space is to dribble or pass, and have the ability to execute a range of passing similar to a central midfielder.

Fullbacks are very important in this formation as they provide the width for the team.  When playing out from the back full back’s will find themselves playing with their heels on the touchline supporting their central midfielders and center back’s.  As the ball travels across the formation fullbacks will usually be tasked with supporting their center midfielders by providing an outside passing option.  This helps the team to retain possession as well as stretch the opposition creating interior spaces for the team to play in.  Good attacking fullbacks providing width and depth on the wing allows teams to play with inside forwards or inverted wingers.  As the team attacks, fullbacks will be tasked with over or under lapping their wingers into space to unsettle the defense as a decoy run or to deliver a final ball.  Active fullbacks create numerical overloads in the attacking areas on the field and add an extra dimension to the attack.  Players in this position need to be confident on the ball, ability to beat players 1v1, have a good range of passing, and deliver crosses or a killer pass.

Central midfielders will be dynamic all round midfielders than can tackle as well as distribute.  This is a crucial partnership at the heart of the 3-2-3 where the most versatile and confident players will be.  This will be the base that the offense plays off of as they sit just behind the attacking midfielders providing support while under pressure and look to switch the point of attack.  In a double pivot the midfielder on the side that is attacking will step with the attack into an ‘8’ role while the partner slides into a traditional ‘6’ role on the field sweeping up danger in front of the center back’s.  These players must be able to adapt to the different stages of the game as they are asked to support defenders playing out from the back, be an outlet to the wingers and fullbacks out wide, link the play moving left to right, and recycle possession as the team looks to maintain possession. These midfielders have defensive responsibility and share the load in terms of keeping the attack going and can create when the opportunity presents itself.

Holding midfielders must have confidence on the ball, passing range, ability to receive the ball back to goal, quality to break lines of pressure, in addition to a high work rate. 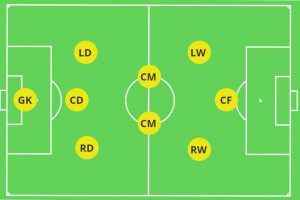 The 3-2-3 splits players into three lines. The defensive unit consists of the standard center-back and full-backs and two defensive midfielders screening them, often called the ‘double pivot’.  The attacking unit consists of a band of three forwards, two wing players and a central striker.  The wingers are generally fast dribblers who like to cut inside or make runs into the box.  The attacking central midfielder is normally a creative passer who can play balls into the feet of either the wide attackers or the lone striker.

A good 3-2-3 formation has a wonderful ‘springy’ quality – it absorbs pressure without breaking and then snaps back with surprising force.  In defense the 3-2-3 covers space very effectively, with the two wingers and the lone striker able to press the opposition high up the pitch while the two central midfielders ensure that there is no space left in front of the defense.  The back three can then play a high line, compressing the space even further, or drop deeper as preferred.  Once the ball is won back, often by the defensive midfielders, the 3-2-3 can spring into attack.

The full-backs can surge up the wings in the knowledge that the defensive midfielders can drop into the space left behind if needed.  As they come up the wings, the wide attackers come inside and they tend to be fast dribblers who look to get into the box. The attacking central midfielder, typically a more creative player on the team, will look to play them or the lone striker in via fast passing combinations.

While at its best the 3-2-3 is a masterpiece of flexibility, when played poorly it can be slow and cumbersome.  If the two midfielders are forced back and compressed into a 3-4-1, the striker can be left isolated with very little support. The full-backs, key to modern attacking soccer, can also be trapped behind their midfield line.  Or the opposite may happen, where the attacking band of midfielders neglect to track back and help their full-backs, allowing opposition wide players to overload the defense.  This is similar to the possible problems in a 4-2-3-1, if the attacking wide players forget their duty to help the team when out of possession.  However it can be even more pronounced as the two defensive midfielders are left with a huge amount of the pitch to cover.